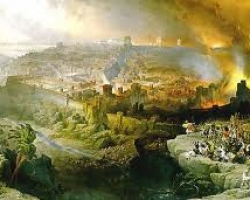 The fast of Tisha B’Av begins tonight. On this date, both the first and second Temples were destroyed. The First, according to the prophets, for idol worship and injustice, the Second, according to the Rabbis, for “baseless hatred” of Jews against other Jews. As you watch the presentation at the link below, think about the “baseless hatred” of Yeshua which continues to today. www.aish.com/h/9av/mm/Crash_Co​urse_on_Tisha_BAv.html

The Holy Spirit and Prayer