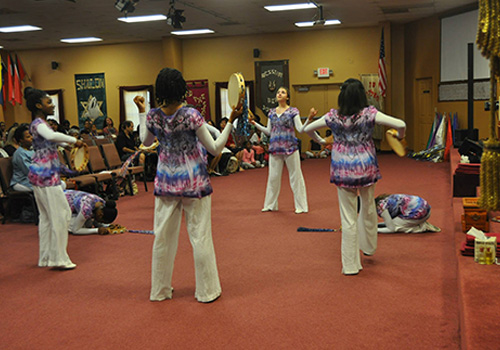 In the Holy Scriptures, God exhorts His people time and time again to worship Him in the dance. He told them the following through King David in Psalm 149:2-3: “Let Israel rejoice before Him who made her, let the children of Zion be joyful in their King. Let them praise His name in the dance.” Again, in Psalm 150:4 we read: “Praise Him with the timbrel and dance.” The ancient Israelites obeyed the Word of the Lord. They danced at every joyous occasion. Jewish Traditions Dance included ritual dances, harvest dances, wedding dances, dances for warfare, victory dances, even dances at the digging of wells (Numbers 21:17). In Judges 21:19-23 we are told that the maidens of ancient Israel went up to Shiloh each year for the Lord’s Feast to “dance in dances” (la-CHUL-bim-cho-LOT) before the Lord. Whenever Israel won in battle, dance was a primary expression of gratitude to the Lord and a testimony to other nations that the God of Israel was the true God. I Samuel 18:6 shows us an example of this type of dancing: “and it came to pass as they came, when David was returned from the slaughter of the Philistine, that the women came out of all cities of Israel, singing and dancing, to meet King Saul, with tabret, with joy and with instruments of music.”

In Judges Chapter 11, we see an example of a dance of hospitality or greeting as Jepthah’s daughter welcomed her father home. The procession, as a primary type of Hebrew dance, was a part of major festivals such as Passover. Pilgrims were led up to Jerusalem by flutes and pipes and timbrels played by the women. They danced as they made their way to Zion (Isaiah 30:25). Some of the Old Testament prophets experienced ecstatic dance as part of the intimacy of their relationship with God. In I Samuel 10:5, for example, Samuel tells a newly anointed King Saul that he would meet a company of prophets coming down from the high place. They would be preceded by a psaltery, a tabret, a pipe, and a harp. In Hebrew, there is little doubt that the prophets were dancing in some sort of enraptured way. Join us as we learn how to dance with the Lover of our souls!