What would have happened in America if…

What would have happened in America if… 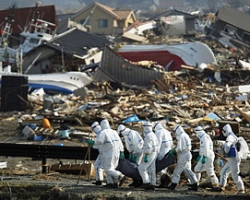 “While looting often becomes an issue post-disaster, it’s been the exact opposite in Japan. Since the March earthquake and tsunami that leveled much of Japan, thousands of wallets containing a total of $48 million in cash have washed ashore — and been turned in, ABC reports. In addition, 5,700 safes containing $30 million in cash also have turned up. Ryuji Ito, professor emeritus at Japan’s Yokohama City University, tells the Daily Mail that these acts of integrity are simply reflective of the culture: “…The fact that a hefty 2.3 billion yen in cash has been returned to its owners shows the high level of ethical awareness in the Japanese people.” And doing the right thing doesn’t just end with the people who found the money. Japanese officials have also worked tirelessly to track down owners and return safes and other valuables. Police in Miyagi prefecture searched for residents at evacuation centers and made their way through missing person reports and address forms at the post office, according to ABC. Police also met with mayors and called any cell phone numbers they could find. Officials tell the news outlet that the difficulty lay in determining whether homes were gone and if the owners were actually still alive.” http://www.huffingtonpost.com/2011/08/18/japan-earthquake-ethical-_n_930808.html?icid=maing-grid7|main5|dl1|sec1_lnk3|87669

Do you think most Americans would have turned the wallets in to the authorities? Do you think the ones who did would be ridiculed by friends and family? What happened to America?

Jewels From My Journey

A Month of Drawing Close