We deeply appreciate your prayers for us as we go up to Zion this month (Nov. 6-17, 2016) on Mercy Mission 2016. We are thankful for the privilege and blessing of being your representatives in the Holy Land. Your love gifts go with us. Your prayers undergird us. Your faith opens doors for us.

Thank you (toe-DAH in Hebrew). “Oh give thanks to the LORD for He is good!” (Ps. 118:1) (HoeDUE l’Ah-doe-NYE key-TOVE in Hebrew טוב כי ליהוה הודו ). Whether we ascend to Jerusalem physically or spiritually in prayer, may we all have a heart of thanksgiving (hoe-dah-AH in Hebrew הודאה (this year. This Hebrew word for “thanksgiving” literally means “an admission.” When we thank the Lord, we are admitting that we could never possibly repay Him for all of His goodness and mercy to us. The central idea of “hoda’a” is that we are to constantly remind ourselves not to take anything, including life itself, for granted. All that we have comes to us from the hands of a loving Creator.

During the days of the Holy Temple in Jerusalem, a series of thanksgiving prayers were recited as part of the Temple liturgy. Psalm 100 was one of them. This psalm will be in our hearts as we pray at the Kotel, the Western Wall, the ancient site of Israel’s great Temple.

“Make a joyful shout to the Lord, all you lands! Serve the LORD with gladness; Come before His presence with singing. Know that the LORD, He is God; It is He who has made us, and not we ourselves; We are His people and the sheep of His pasture. Enter into His gates with thanksgiving (b’toe-DAH), and into His courts with praise. Be thankful to Him, and bless His name. For the LORD is good; His mercy is everlasting, and His truth endures to all generations.”

Giving Thanks for Israel’s Victories

We felt that it would be appropriate during this month of thanksgiving to thank the Lord for ways in which he has given Israel and the Jewish people victories over the many enemies that seek to destroy both God’s People and God’s Land. We are made aware of these enemies—anti-Semitism, BDS movement, radical Islam, many European nations, the U.N., etc., and Israel’s triumphs over them, through the World Jewish Digest. This publication by the World Jewish Congress is extremely informative, giving us monthly updates on Jewish news in Israel and throughout the world. We highly recommend this traditional Jewish publication to our mishpocha, so that you too can be up-to-date on events in the Jewish world. You can order a subscription at worldjewishcongress.org or 212-894-4770.

The following information was taken from the World Jewish Digest, 2016 Special High Holidays Edition and the 2016 September edition. We found many reasons to thank our Father in heaven.

Todah, Abba: for the 1,000 participants from a dozen countries who gathered in Geneva in September 2015 to support Israel as the UN Human Rights Council held another debate on Israel’s role in the 2014 Gaza conflict. (Israel is continually demonized in the U.N. The U.N. Human Rights Council is supposed to ensure that human rights are respected everywhere in the world. However, since its establishment, this Council has approved more than 45 resolutions condemning Israel—over one third of all resolutions concerning countries.) Supporters urged the U.N. to treat Israel fairly.

Todah, Abba: for the resolution adopted by Luxembourg’s Parliament apologizing for the collaboration of government officials in their deportation of Jews during the German occupation in 1940. Luxembourg’s Prime Minister Xavier Bettel stated, “The fact is that 1,300 Jews were deported from here, Belgium or France and they were all killed.” The resolution also called for serious efforts to be undertaken to prevent anti-Semitism.

Todah, Abba: for the legislation passed in Romania that punishes Holocaust denial and the promotion of the fascist Legionnaire’s Movement. (This is a result of a recent survey of 1,000 Romanian adults. One quarter of respondents said that their country should have no Jewish residents. Eleven percent described Jews as a “problem for Romania.” Twenty-two percent said they would like Jews only as tourists.)

Todah, Abba: for Australia’s new Prime Minister, who vowed to have stronger ties with Israel. He was quoted as saying, “We need to collaborate more with Israel, particularly on matters of science and technology. The more we can do with Israel, the better.”

Todah, Abba: that the World Jewish Congress was able to get a UNESCO resolution, sponsored by Arab countries, defeated. The resolution would have declared the Western Wall, the holiest Jewish place of prayer, to be a Muslim site. (The resolution was sponsored by Algeria, Egypt, Kuwait, Morocco, Tunisia and the United Arab Emirates on behalf of the Palestinians.)

Todah, Abba: that the U.S. House of Representatives passed a unanimous resolution regarding “the safety and security of Jewish communities in Europe.” (This was necessary due to the significant increases in anti-Semitic acts throughout Europe, especially in France, home to Europe’s largest Jewish community. The resolution highlighted several serious incidents, including the terror attack at a kosher supermarket in Paris in 2015.)

Todah, Abba: for the Danish Prime Minister who expressed support for Danish Jewry and made provision for adequate security, following the deadly terrorist attack at Copenhagen’s main synagogue. Prime Minister Rasmussen is quoted as saying, “I get concerned when the Jewish school is vandalized, when a Gaza demonstration develops into anti-Semitism, and when men do not dare to wear a skull cap in Copenhagen because they feel unsafe.”

Todah, Abba: that the highest court in Germany is considering a ban on the far right National Democratic Party, which has a “recognizable affinity” with Hitler’s Nazi party.

Todah, Abba: that New York City has passed a bill requiring the city to provide a private security guard to all non-public schools with more than 300 students. Most of the 350 Jewish schools in New York City would qualify.

Todah, Abba: that the United Nations has agreed to add Yom Kippur, the Day of Atonement, to its list of official holidays. This holiest day in the Jewish calendar now joins Christmas, Good Friday and the Muslim holidays of Eid al-Fitr and Eid al-Adha as official UN holidays

Todah, Abba: for UNESCO Director-General Irina Bokova who had the boldness to condemn the Iran Cartoon Contest that mocked the Holocaust, Passover 2016. This third international cartoon competition drew cartoonists from at least 50 countries. The cash prize for the winner was $50,000.

Todah, Abba: that the Prime Minister of France, Manuel Valls, strongly condemned anti-Semitism and acknowledged that anti-Zionism is simply a thin veil for the new style of anti-Semitism. Valls said, “Israel is a democracy, a nation that speaks to the world, and France will always be by its side.”

Todah, Abba: that the Canadian Parliament passed a motion condemning the Boycott, Divestment and Sanctions (BDS) movement against Israel. Canada’s Foreign Affairs Minister has been quoted as saying, “The world will win nothing for boycotting Israel but depriving itself of the talents of its inventiveness.”

Todah, Abba: that there is a “Code of Conduct” to combat Online hate speech, racism and terrorism. (Please move upon Google/YouTube, Facebook, Twitter and Microsoft to police their respective platforms, and follow the rules that they have adopted.)

Todah, Abba: for an Israeli company that successfully protected the 2016 Olympic Games from terrorist attacks. International Security and Defense Systems (ISDS), Brief Com, EROS-B satellite and Say VU were all part of the security in Rio this summer. ISDS, which provides integrated solutions for complex security projects, was the “Official Supplier” of security solutions for the 2016 Games. Did anyone say: “Thank you, Israel”?

Todah, Abba: for the Israeli company Live U, whose award-winning technology enables live video transmission from any location around the world. Live U was used by 80 international broadcasters at the 2016 Olympic Games in Rio to deliver all the live action of the Olympics to their audiences. Can we say, “Thank you, Israel” once more?

Todah, Abba: that Motionize, an Israeli sports-tech company, helped the U.S. rowing team by uniquely using two independent sensors to give paddlers a complete picture of their movements and instant feedback. Pointer Telocation, another Israeli company, provided the technology to manage transportation during the Olympics. Moovit, the Israeli public transportation app, provided real-time information in 35 languages on the fastest routes for buses, trains, subway, light rail, ferry boats and cable cars. Thanks for blessing the world, Israel!

Todah, Abba: for the recent first-ever election of Israel to the presidency of a key U.N. body. Israel’s U.N. Ambassador Danny Danon was elected to be the chair of the U.N.’s Sixth Committee, the committee that deals with legal issues and terrorism. Praise the Lord! This election has been called an “historic achievement.”

Todah, Abba: for the resolution passed by the Southern Baptist Convention in support of Israel. The SBC condemned the BDS movement which “seeks to isolate the nation of Israel economically and socially.” Also included in the SBC resolution were the words, “At this critical time when dangerous forces are mounting up against the nation of Israel, we recommit ourselves to pray for God’s peace to rule in Jerusalem and for the salvation of Israel.”

Todah, Abba: for N.Y. Governor Andrew Cuomo who recently signed an executive order demanding state agencies to remove themselves from the BDS movement against Israel. Cuomo tweeted, “If you boycott Israel, New York will boycott you.”

This Thanksgiving, we thank the Lord that the Messiah and Savior of the entire world was born a Jew, in the Land of Israel, and is coming back to rule and reign from Jerusalem. Israel and the Jewish People are still very much in God’s plan. He is in the process of wooing His People back to Himself. Consider the following Scripture verses as they relate to God’s People and God’s Land:

— “Afterward the children of Israel shall return and seek the Lord their God and David their king. They shall fear the Lord and His goodness in the latter days.” Hosea 3:5

— “I will heal their backsliding, I will love them freely, for My anger has turned away from him. I will be like the dew to Israel…” Hosea 14:4-5

— “The Deliverer will come out of Zion, and He will turn away ungodliness from Jacob; for this is My covenant with them, when I take away their sins.” Romans 11:26-27

— “Then I looked, and behold, a Lamb standing on Mount Zion…” Revelation 14:1

— “Great is the Lord, and greatly to be praised in the city of our God, in His holy mountain. Beautiful in elevation, the joy of the whole earth, is Mount Zion on the sides of the north, the city of the great King.” Psalm 48:1-2

Thanking God for each one of you, faithful friends, lovers of God—and for your prayers as we go up to Zion to bless God’s People Israel. 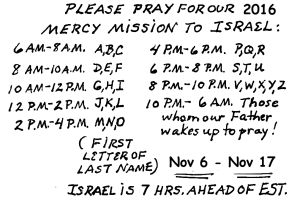 Love in the Great King,

Unity in the Body of Messiah