The Messianic Writings by Daniel Gruber

The Messianic Writings by Daniel Gruber 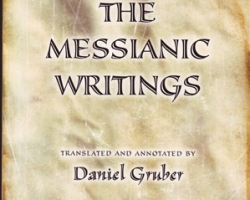 Daniel Gruber is a dedicated researcher, a gifted writer, and a long time friend. As the culmination of over twenty years of research, he has just published a new covenant translation titled The Messianic Writings.

In the Hebrew mindset of those times, life revolved around relationships (I am the God of Abraham, Isaac, and Jacob.) and action (I am the God who brought you out of Egypt). To the Greek, or Western mindset, ideas were most important as evidenced by Luke recording Rabbi Paul’s experience in Athens: “… they brought him to the Areopagus, saying, ‘May we know what this new doctrine is of which you speak?” For all the Athenians and the foreigners who were there spent their time in nothing else but either to tell or to hear some new thing.” (Acts 17:19-21)

All of this has led us to today where the emphasis in Judaism is what you do (DEEDS) while the church has focused on what you believe (CREEDS). The problem is that we need both. That’s why Yeshua’s responding to the question: What is the most important commandment? said: “You shall love the LORD your God with all your heart, with all your soul, with all your strength, and with all your mind, and ‘your neighbor as yourself.’” (Luke 10:27) Clearly, Yeshua was saying you need both CREED and DEED (as does James 2:17).

If you are serious about studying the Bible, and want to see it more clearly from a Hebrew mindset, this book is for you. You may purchase a copy at:www.elijahnet.net

Through My Eyes by Tim Tebow

me: A “Middle-of-the-night-Poem” by Neil

The Ninth of Av